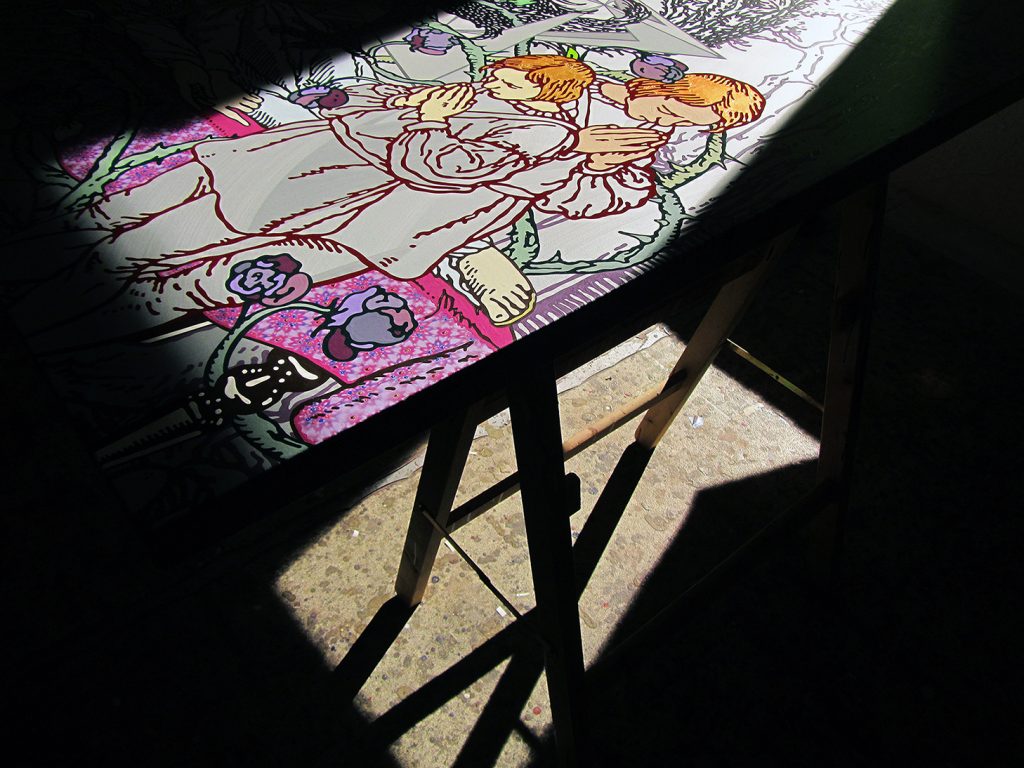 How much longer will it be possible to paint a crucifixion as a political act? This question tormented Gabriele Arruzzo as he was preparing this new solo show, caught in the jaws of a dilemma between the “mystery” of the image and an iconoclast impulse of most ancient origin (first Byzantine, then Calvinist, now jihadist). The artist also asked himself if a painting could exist that is not a form of religion for the painter, namely an immaculate imagination that does not have religious value per se, yet is an absolute truth for the artist himself. Arruzzo thus reached the formulation of his own syllogism: if the Son of God has been made flesh and it has been possible to represent him, then He himself is the Nature of representation, the very origin of the Work, like a painting crucified on the wall.
In Arruzzo’s “devotional paintings” we find praying figures that allude to teaching, devotion, suffering. The same can be said of the stereotyped effigies of certain painters that hover before their sacred rectangles. Like martyrs, the author-witness is also the designated victim of the sufferings and ecstasies inherent to the ars picta, conceived by the artist as a cage-surface from which it is impossible to escape. The two-dimensional identity of the image – anti-realist precisely because it is flat – is aggravated by the Platonic solids: perspective geometries realize a three-dimensional space that does not, however, permit venture outside the painting. Arruzzo’s cage, however, is a gilded one, an ideal of beauty that stimulates out desires and pleasures.
Intrinsically promiscuous, the painting of Gabriele Arruzzo ranges from Holbein to Hitler Youth handbooks, the Pre-Raphaelites to old catechisms. His works can be compared to hypertexts offering the chance to observe the frenetic layering of signs, symbols, meanings. Philosophizing brush in hand, the artist strives to combat the totalitarian regimes that oppose figurative art and the dictatorships imposed by painting itself. Resisting and surviving these tyrannies, the paintings are converted into acts of faith, i.e. a personal vision. This “revelation of things kept hidden” has a precise name: Apocalypse (in this case an Apocalypse “cum figuris” that takes its cue from the graphic work of Albrecht Dürer). Arruzzo, in fact, is convinced that painters, like prophets, are the receivers of revelations that make them akin to the ranks of the seers, of “those who see.”
The exhibition is accompanied by a catalogue conceived as an artist’s book, where the reader can discover that various iconographic sources and understand the dense, complex imaginary of the artist. 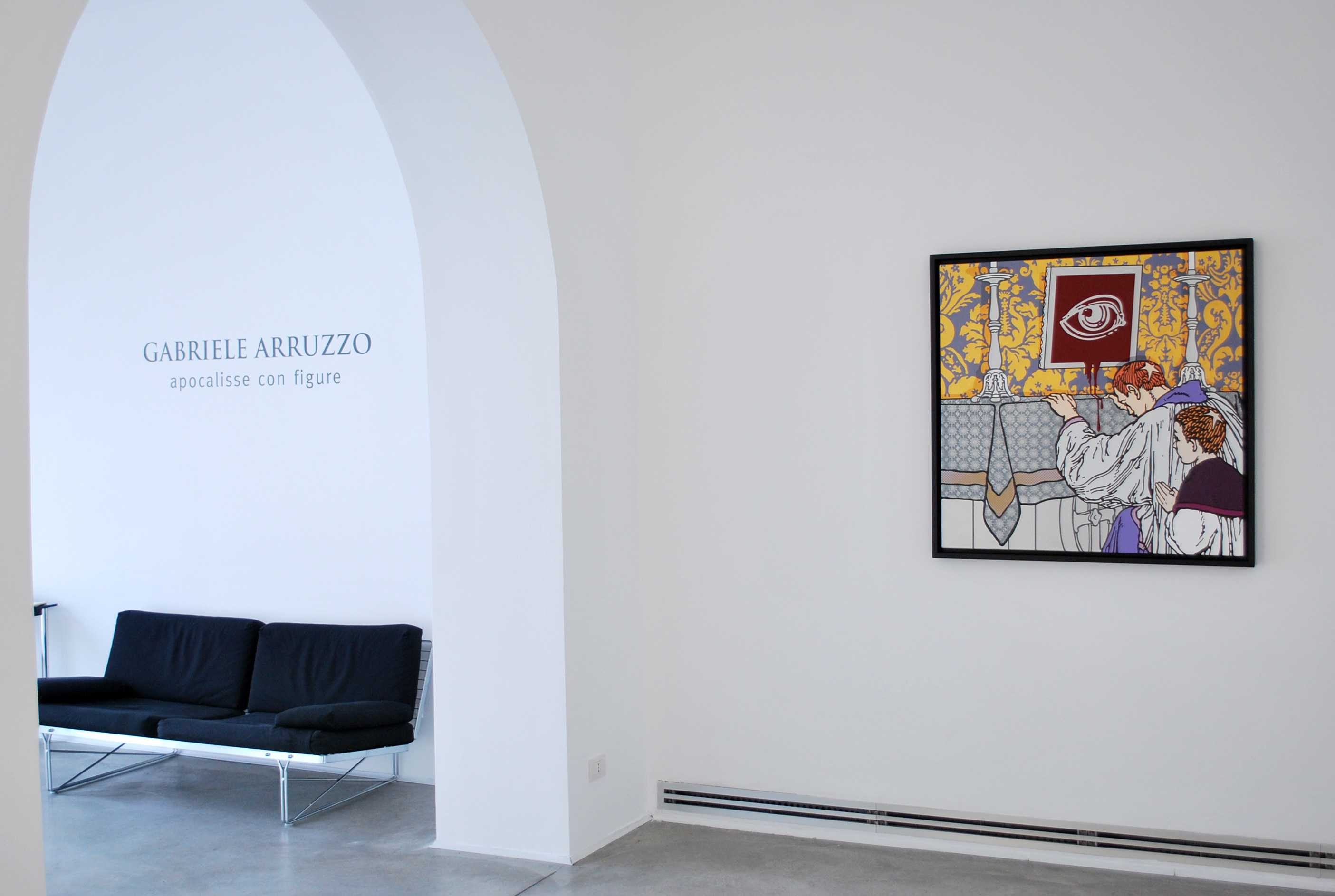 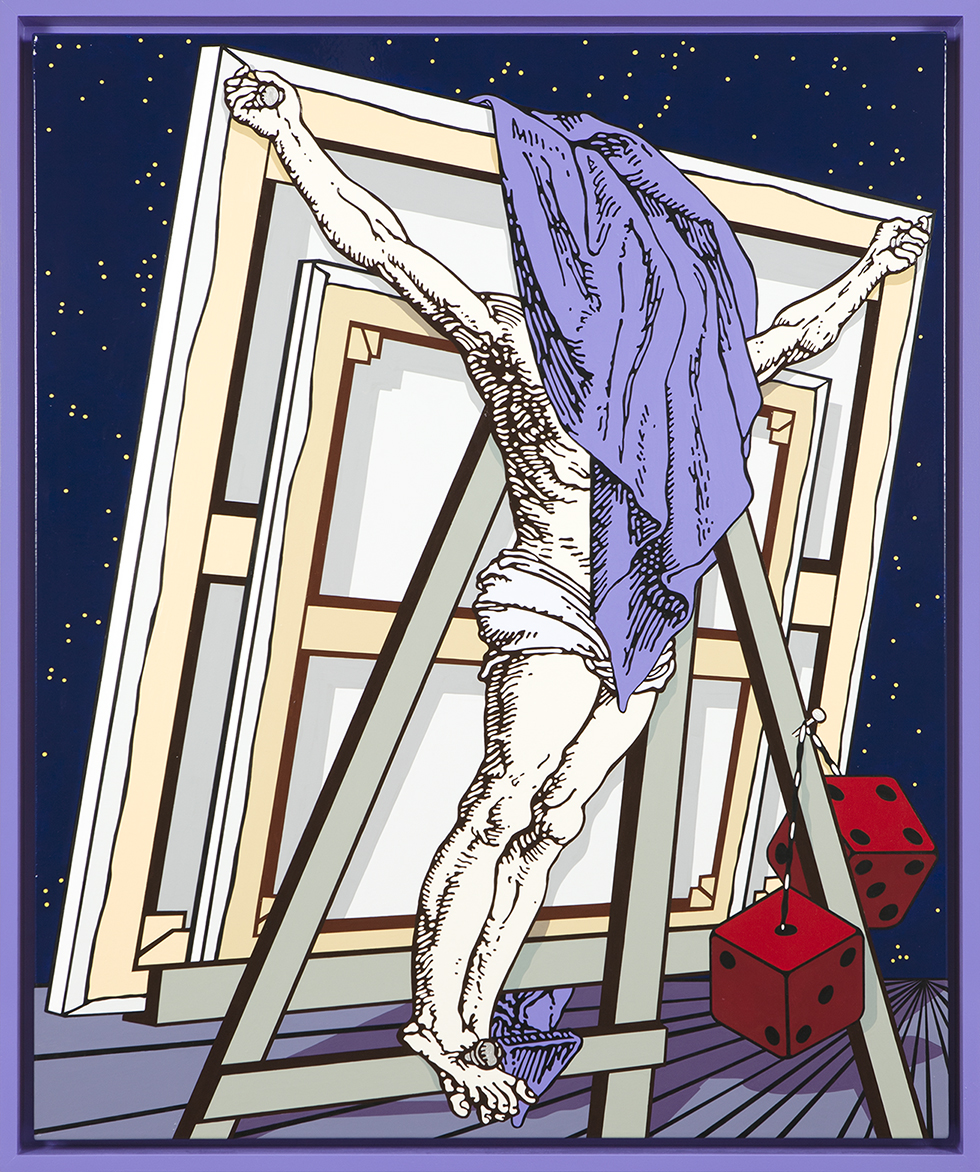 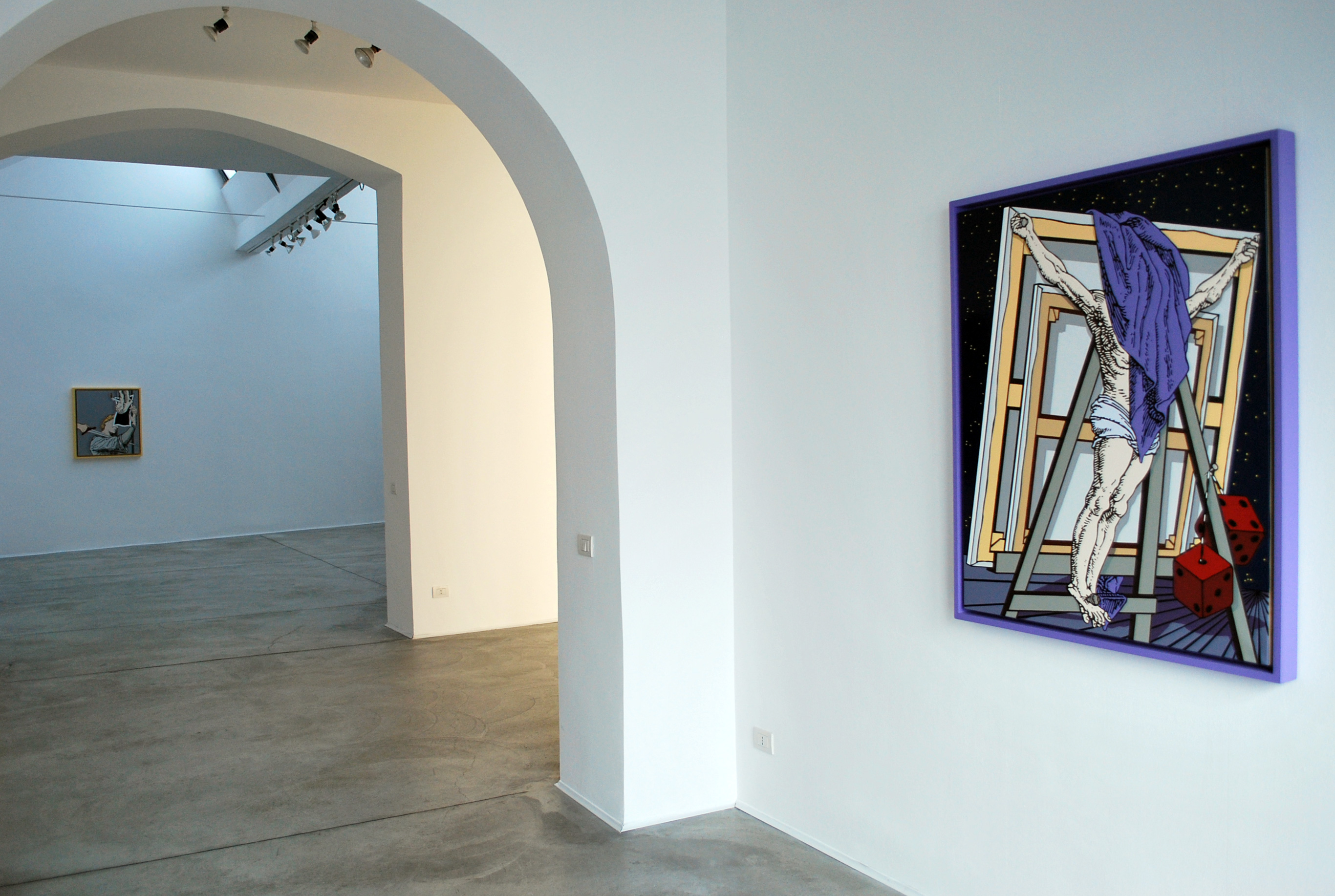 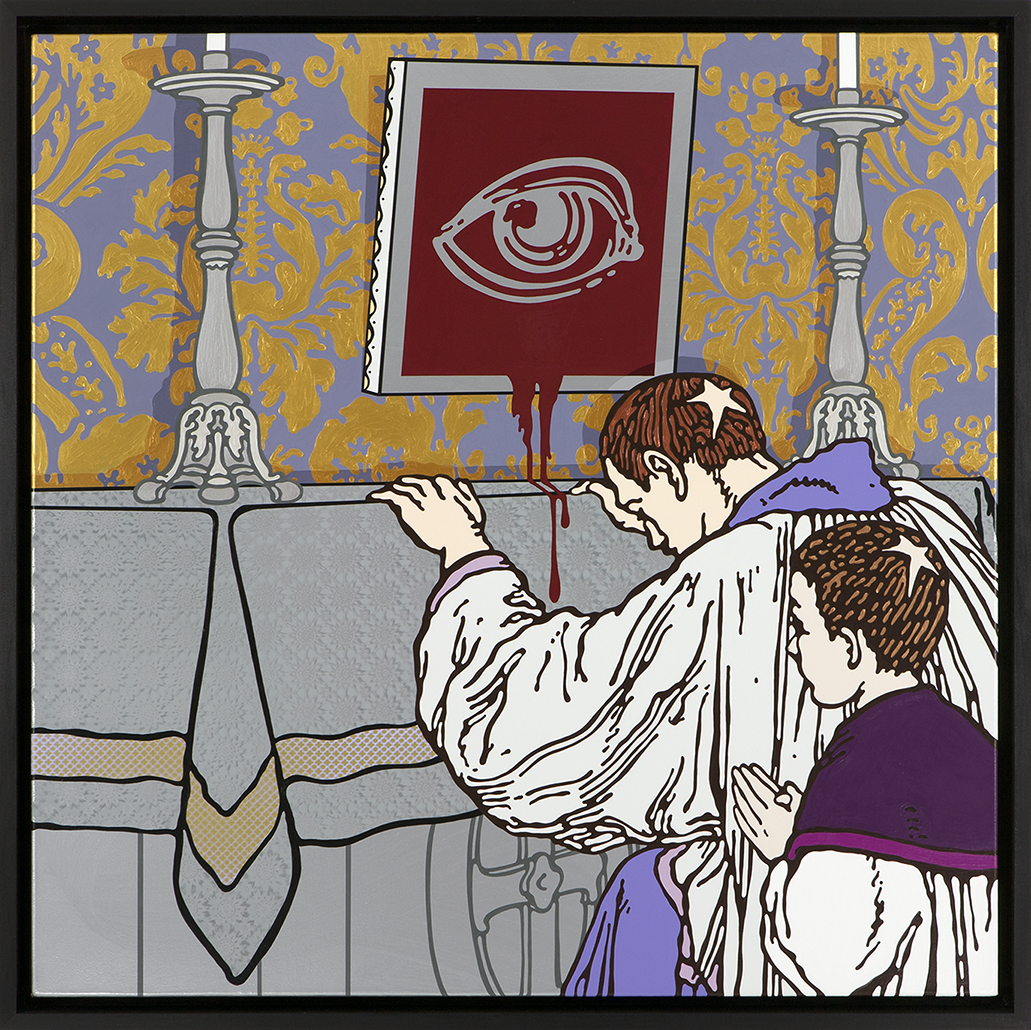 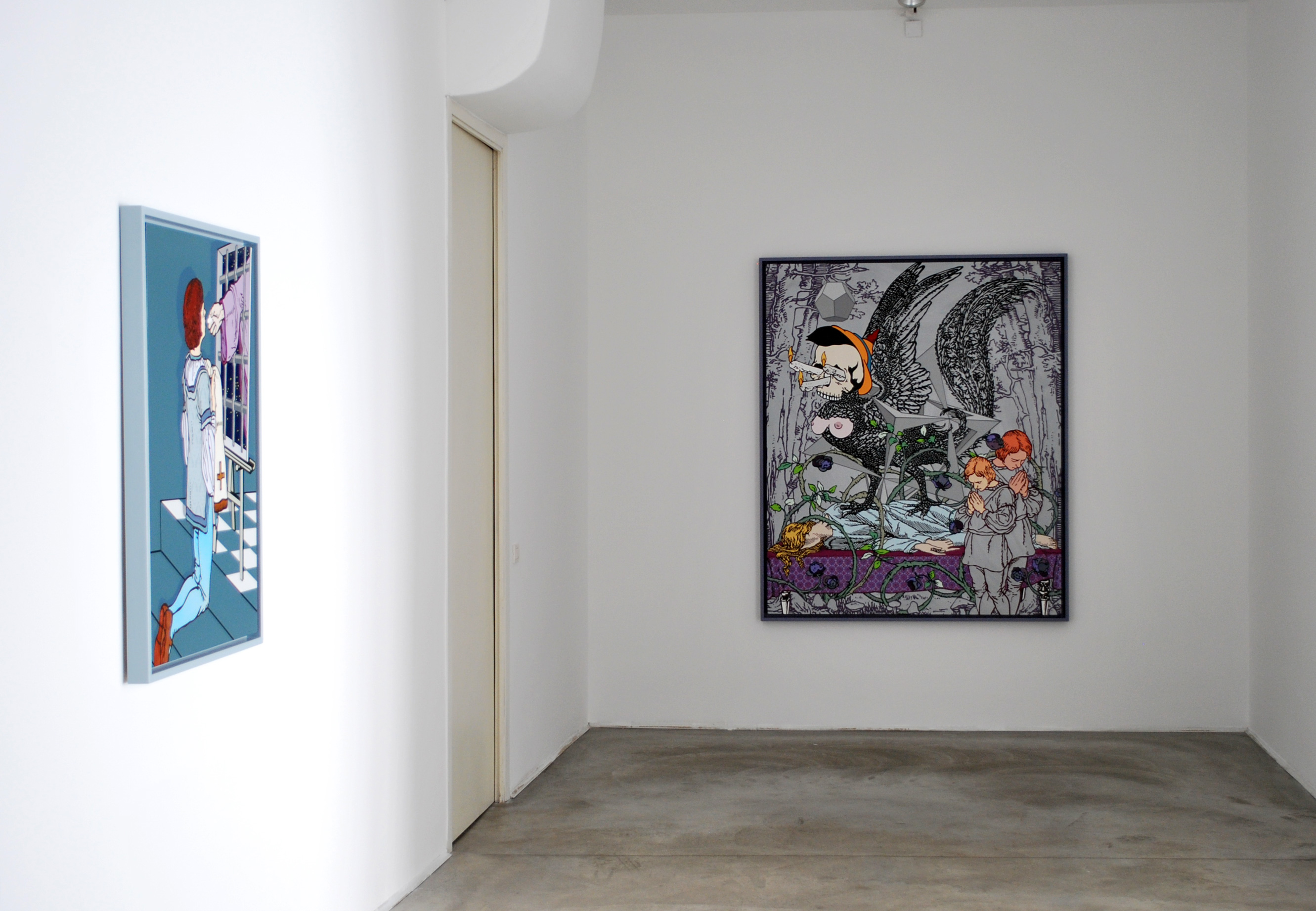 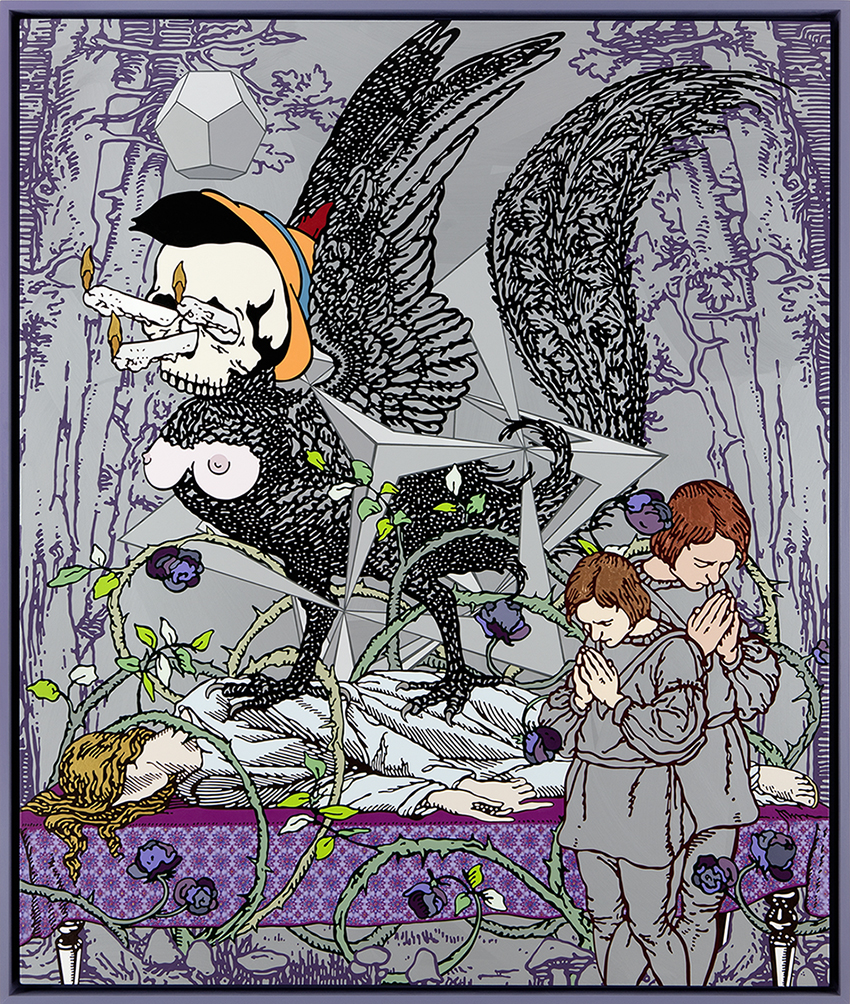 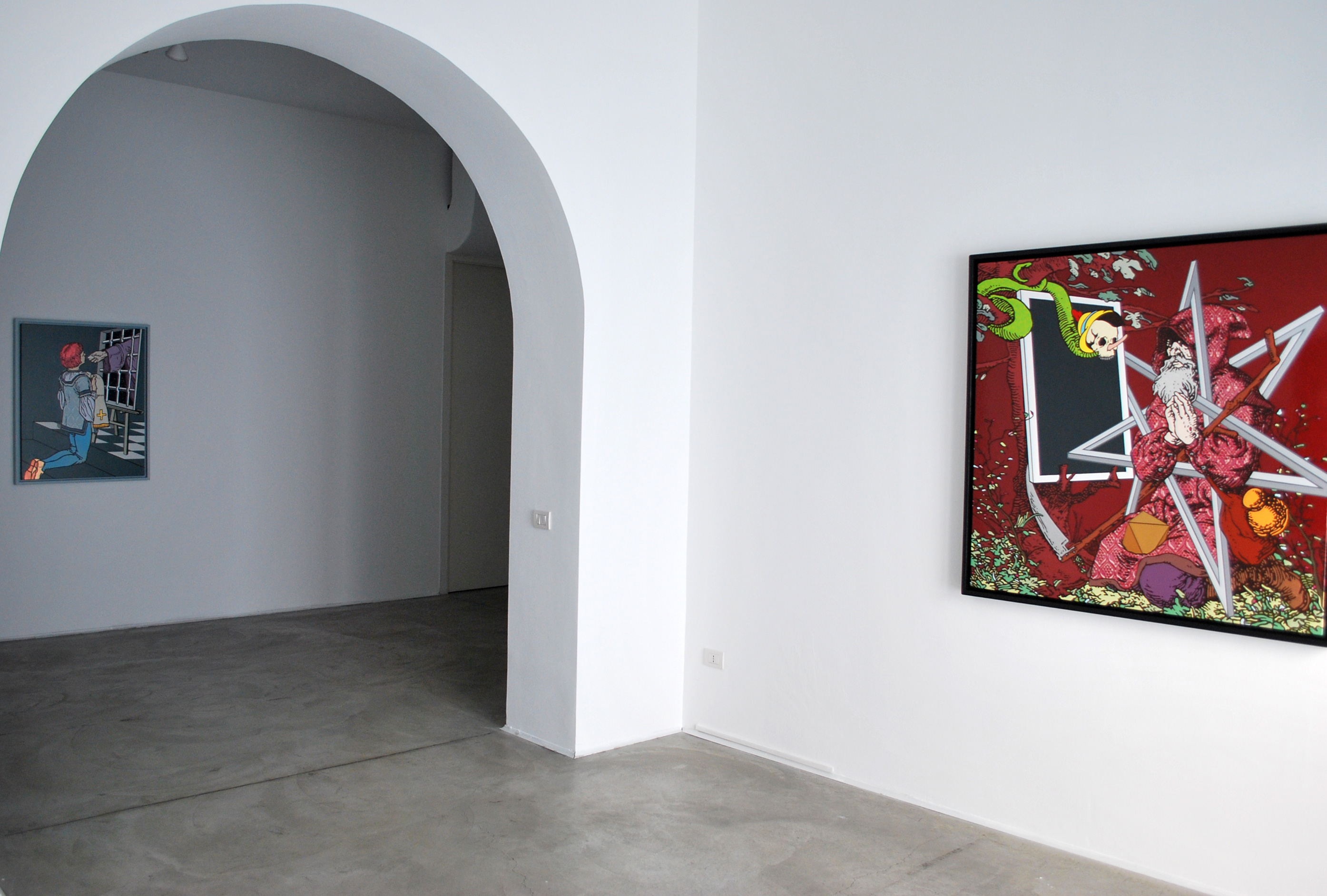 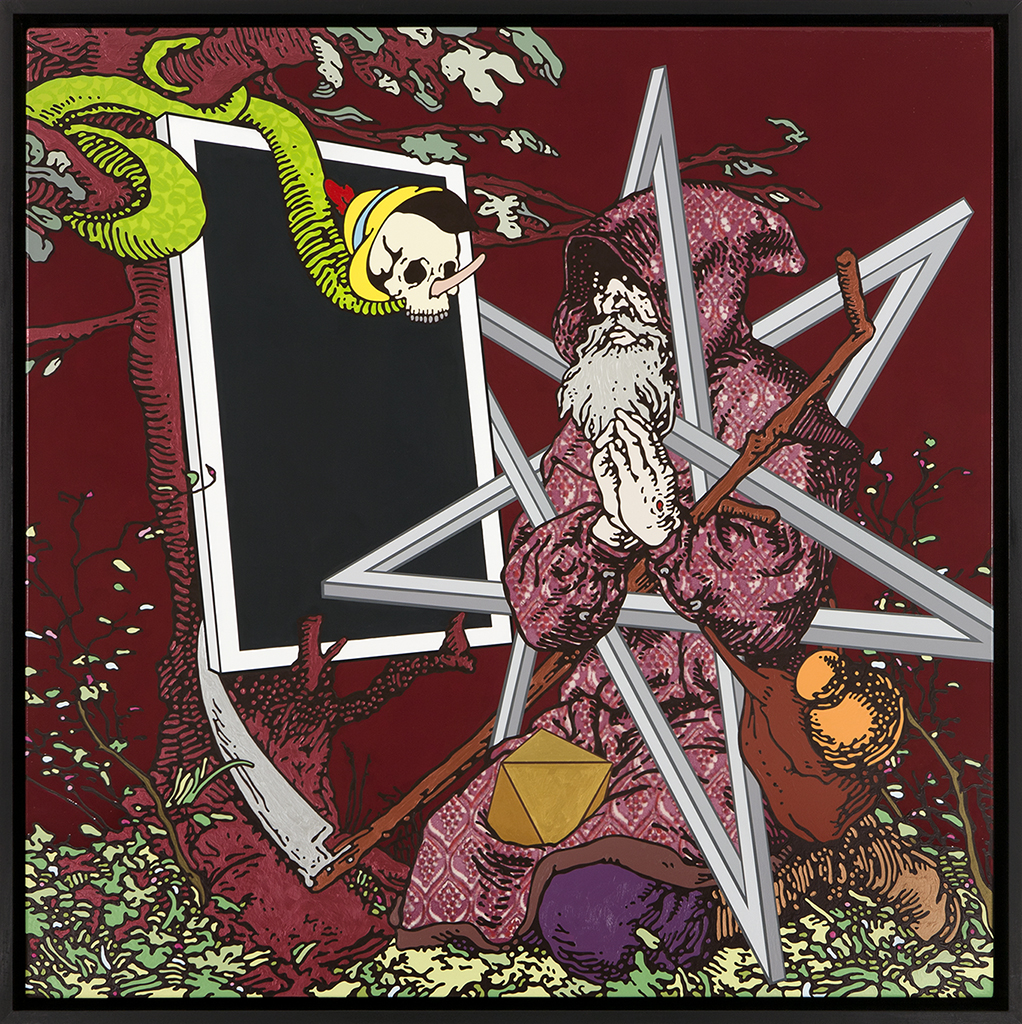 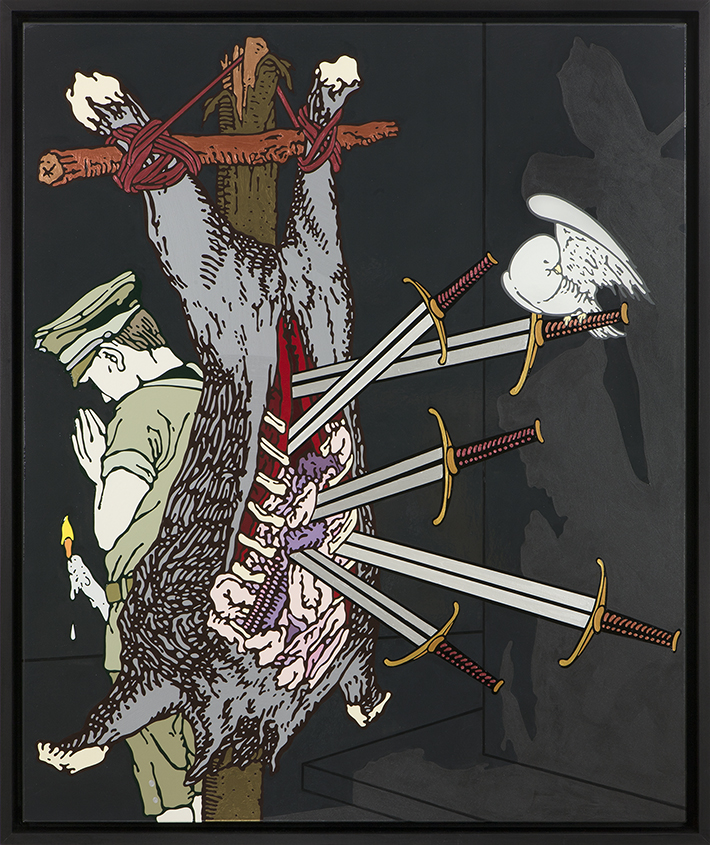 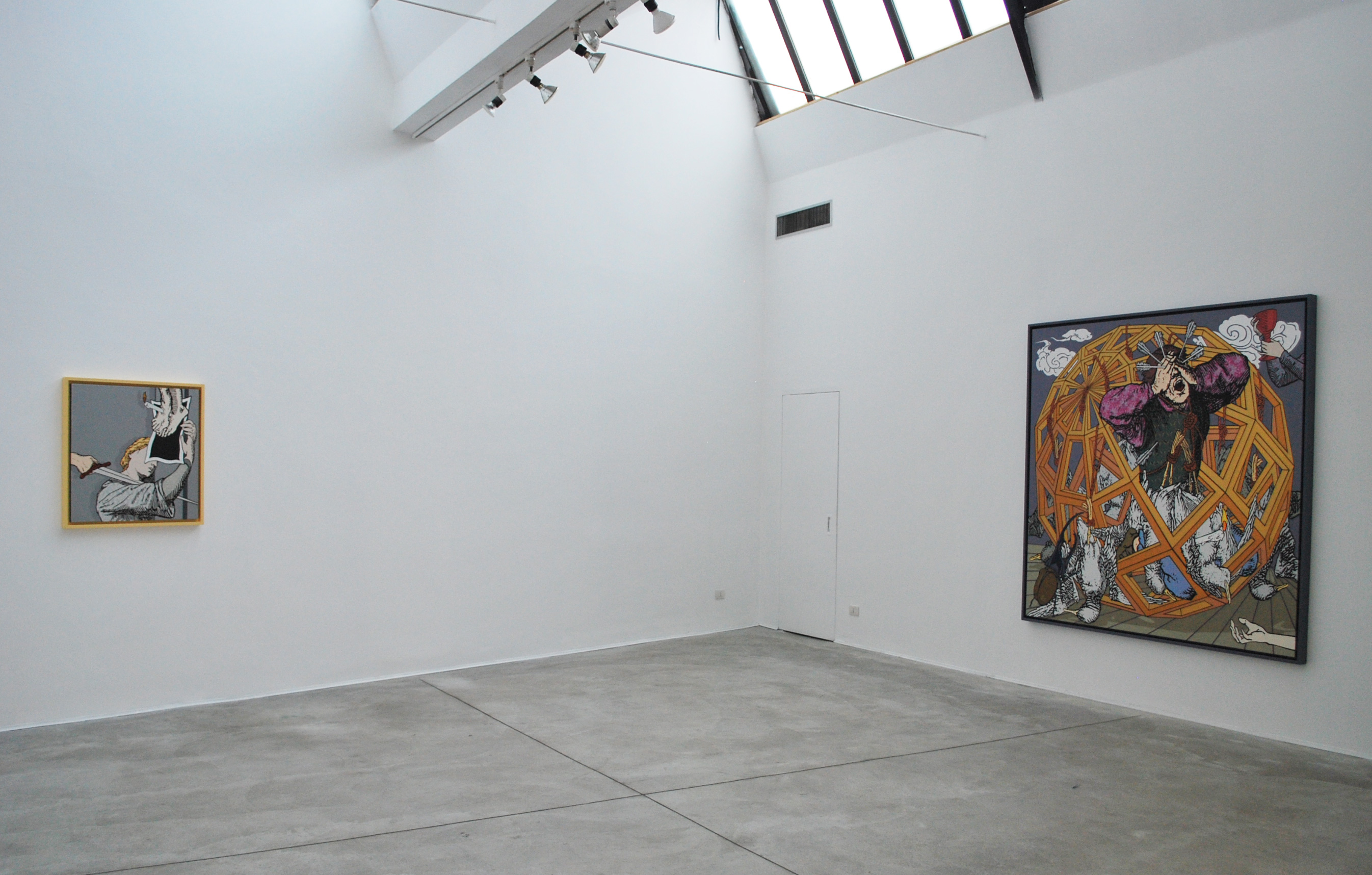 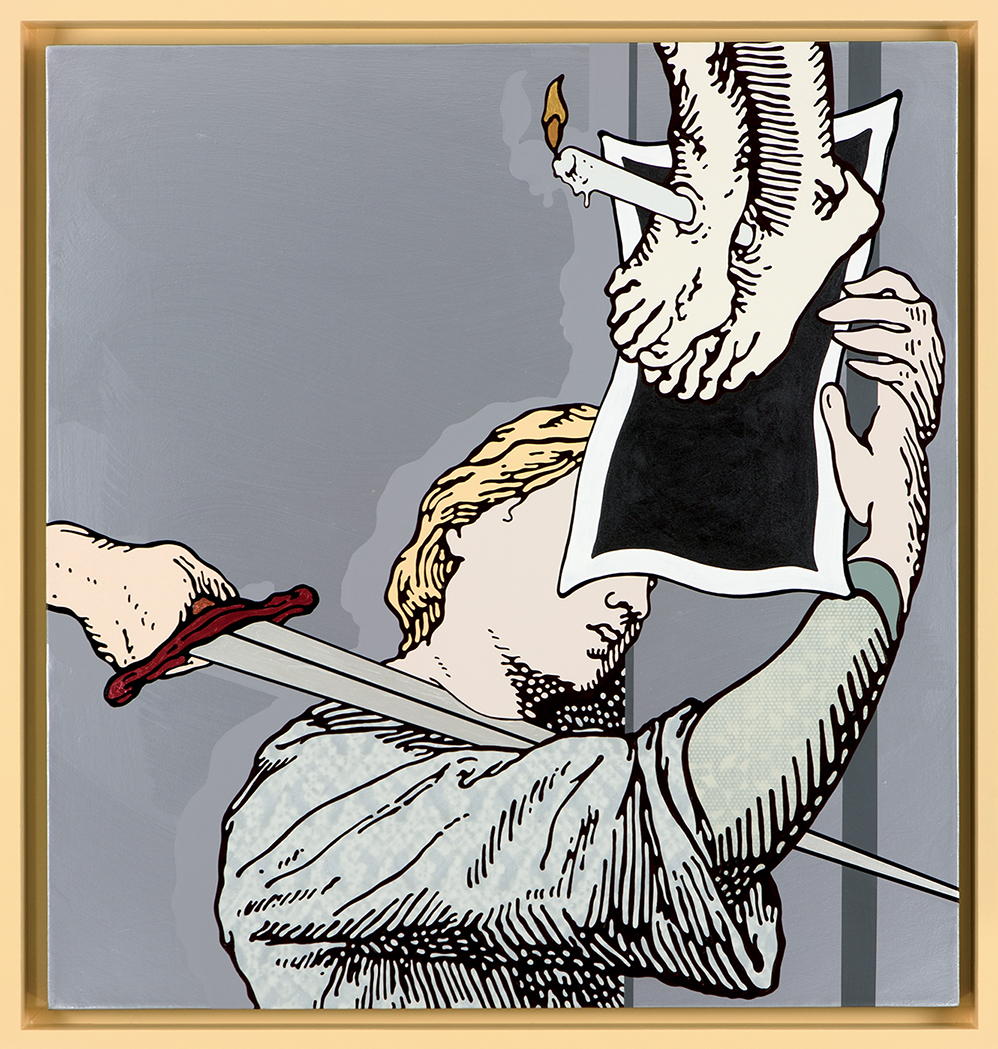 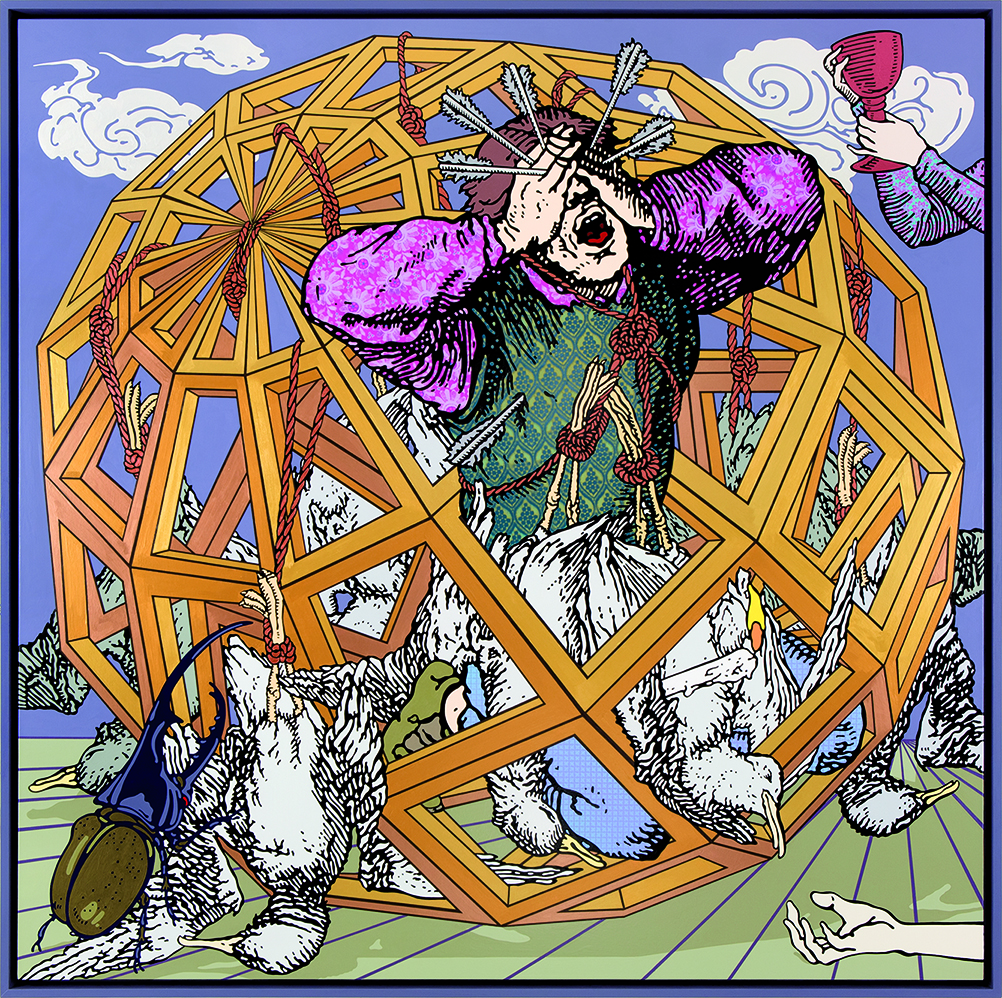 in a golden cage (portrait of a painter as Saint Paul as Saint John as a reversed Sisyphus), 2015 enamel and acrylic on canvas and wooden frame, 207x207cm​ 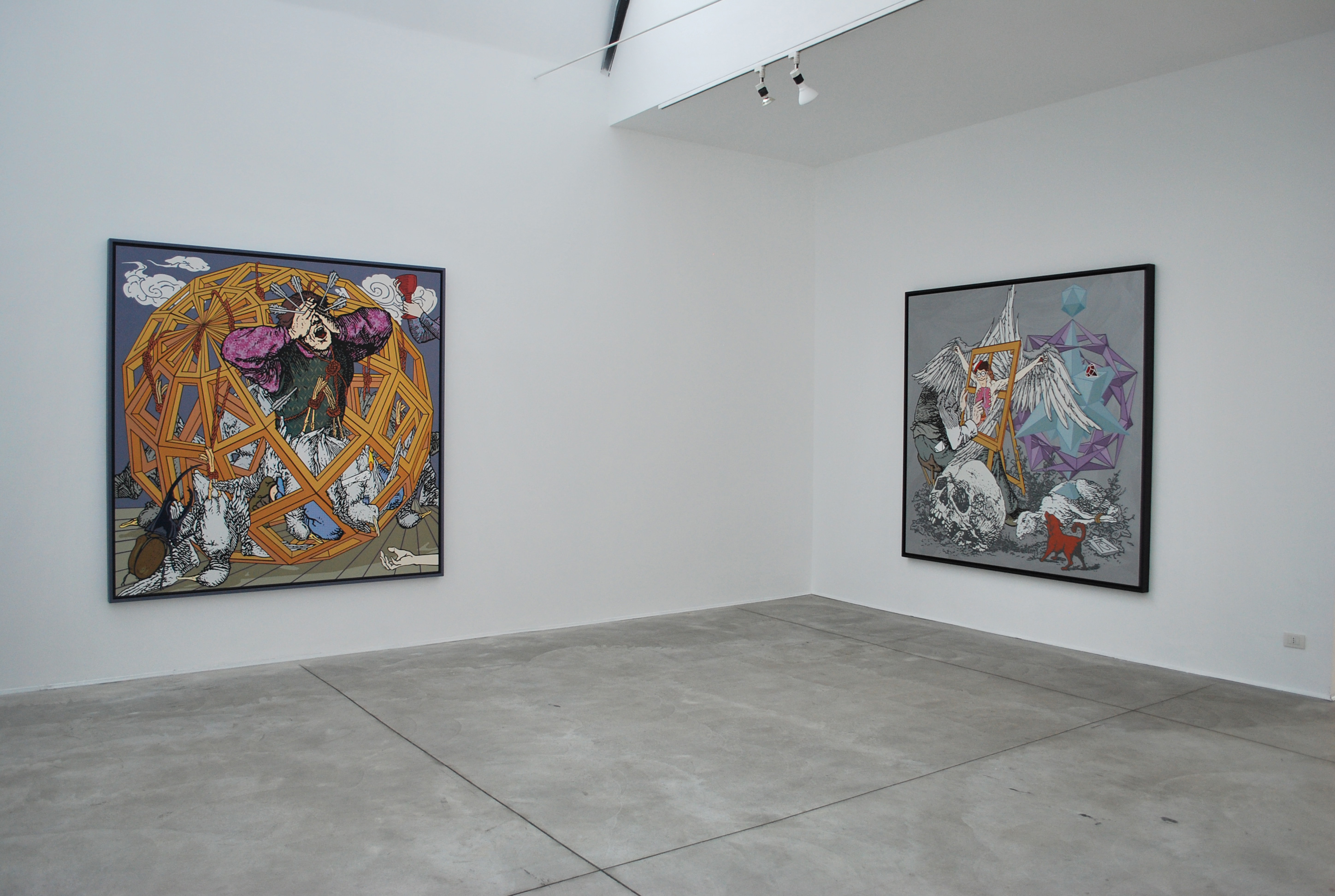 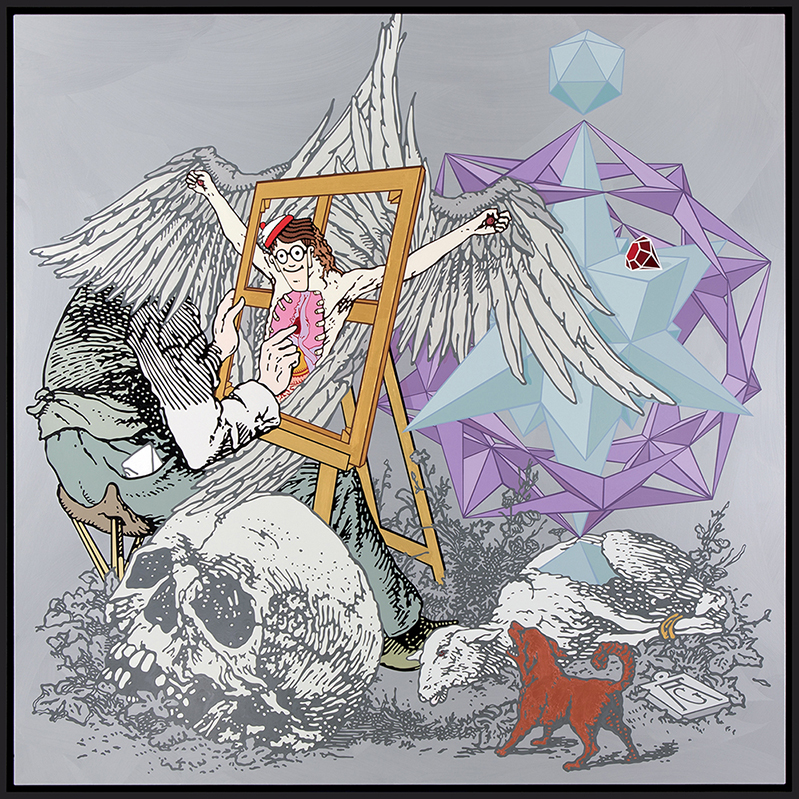 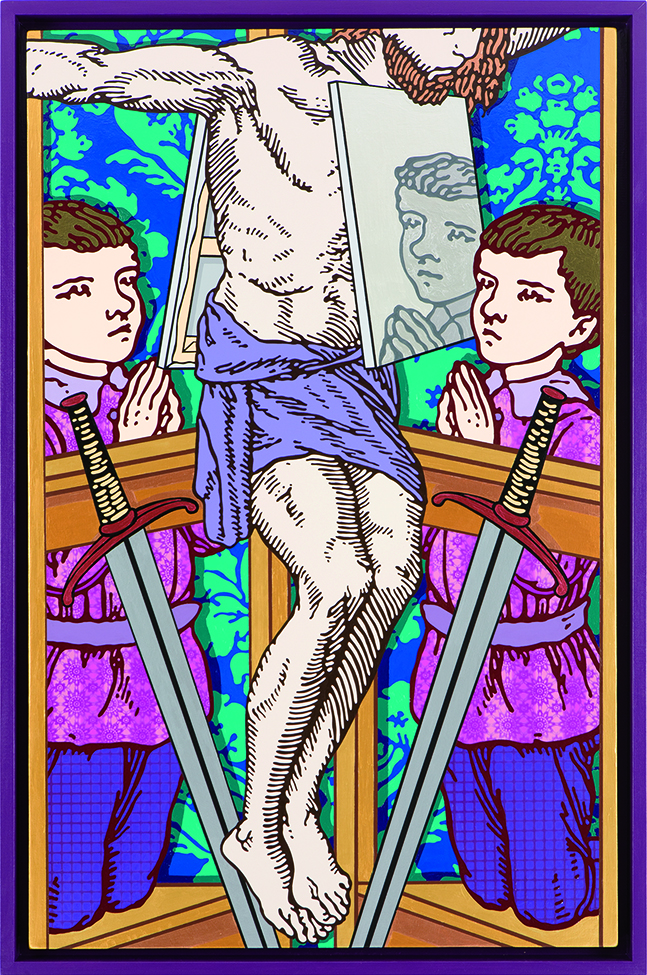 untitled (the distance that shapes us),enamel and acrylic on canvas wooden frame,119x78,5cm,2015